Compared with some parts of the UK where the persecution of badgers is rife, our area almost appears to be a safe haven. However, there are many setts on private land which Brockwatch volunteers and members of the public cannot access. The incidents referred to below are probably just the ‘tip of the iceberg’.

Over the years we have found a number of setts which have been attacked by badger diggers. We can only conclude that badgers have been taken away from these setts to be baited.

Lamping – hunting at night with the aid of powerful spotlights – is very difficult to detect. However, we have had one confirmed incident where a badger was shot and killed by lampers in the Cold Ashby area.

More information on the lamping and shooting of badgers can be found on the Badger Pages website.

We do not know of any confirmed cases of badgers being deliberately gassed or poisoned in our area in recent years. However, there has been an incident where two badgers were killed when vandals interfered with poisoned bait which was intended to kill grey squirrels. 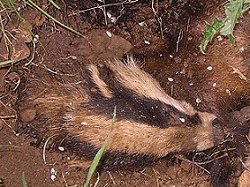 A badger killed by a snare

Over the years several badgers have been found in snares in our area. The most recent incidents involved a badger found dead with an ‘AB’ snare around its neck near Croughton (see photo), and five snared badgers found near Boddington.

To learn more about snares visit the Badger Pages website.

Before the Hunting Act 2004 became law, badger setts were regularly blocked up in advance of fox hunts, to prevent foxes from taking refuge in them. In some cases, the blocking was excessive, with large amounts of earth packed hard into the holes. Some setts were abandoned due to heavy blocking. At the end of 2005, one of the setts monitored by Brockwatch was blocked just before a fox hunt took place in the area. The police have spoken to the local hunt to remind them of the law relating to badger setts.

Over the years we have also investigated several cases of badger setts in fields being ploughed over by farmers.